Buddhist funerals are based upon reincarnation. The religious faith of Buddhism believes that death for the deceased marks the transition from this life to the next. Amongst Buddhists, death is regarded as an occasion of major religious significance for both the deceased and survivors. For the deceased, death is the moment when the transition to a new mode of existence within the round of rebirths. When death occurs, all of the kammic forces that the dead person accumulated during the course of their lifetime is activated and determining the next rebirth. For the living, death is a powerful reminder of the Buddha's teaching on impermanence, as well as provides an opportunity for them to assist the deceased as they travel on to their new existence.

For the non-Arahant, death is a time of transitioning to another rebirth. The living participate in acts that transfer merit to the departed by providing for a more auspicious rebirth or for the relief of suffering in the departed's new existence. In Sri Lanka, funeral customs include:

"Offering of cloth on behalf of the dead" (mataka-vastra-puja): Prior to a cremation, at the deceased's home or cemetery, the buddhist funeral consists of presiding monastics are offered a white cloth that will subsequently be stitched into monastic robes. During this ceremony, the following verse is recited:

Translated Verse:
Impermanent alas are formations,
subject to rise and fall.
Having arisen, they cease;
their subsiding is bliss.

"Preaching for the benefit of the dead" (mataka-bana): Within a week after the funeral (usually the 3rd Day), a monastic returns to the deceased's home to provide an appropriate hour-long sermon for surviving relatives and neighbors.

"Offering in the name of the dead" (mataka-dana) is performed 3 weeks after the funeral service and then annually. This is when the deceased's survivors hold an almsgiving on the deceased's behalf. 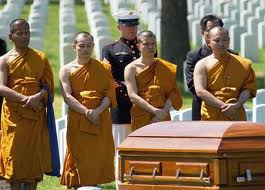 
In the Mahayana tradition of Buddhism, to which most Chinese Buddhists subscribe, it is believed that between death and rebirth there is an intermediate period – called Antarabhava in Sanskrit, or the Bardo in Tibetan. It is an important period which influences the form that the rebirth shall take. If the family ensures that proper assistance in the form of prayer and remembrance ceremonies are duly performed, the departed is better able to take a favourable rebirth.

There are two main traditions that are observed:

After 100 days a final prayer ceremony may be conducted, but this ceremony is optional and not considered as important as the other two funeral ceremonies.

A person who is dying and has recently died will have the "Tibetan Book of the Dead" read to them (in the Nyingma tradition). This is to help guide them through the transition period between lives, easing attachments to this life and deepening bodhisattva wisdom. The corpse is either cremated or dismembered and fed to vultures.

Other Tibetan traditions have other special texts read and rituals performed, which may also be personalized to the specific (Vajrayana) practice a person focused on during their life. As the Bardo generally last a maximum of 49 days, these rituals will last 49 days as well.

Death and dying is very important in Tibetan Buddhism. It is believed to be the most critical period for deciding which karma will ripen to lead one to the next rebirth, therefore a proper control of the mind at the death process is considered essential. As firewood was very scarce and the ground not suitable for burial, the body is feed to vultures and other animals as the last act of generosity and detachment to the physical body. Those who were considered meditation masters*, were often cremated and their ashes stored as relics in stupas.

Note: *According to Tibetan culture, meditation masters could remain for long periods of time in a state between clinical death and the separation of the mind and the body (the moment of death in the Tibetan tradition). During this period they were considered to be meditating on the special appearance of the "clear light mind". Using this special, very subtle state of mind, it is said in the Vajrayana teachings that great spiritual progress could be made if one has the capacity to be clearly aware of it. In this state of meditation, the body will not show any ordinary signs of death, decay or even smell. After this prolonged period of meditation, the person meditating would continue into the Bardo or even towards enlightenment. 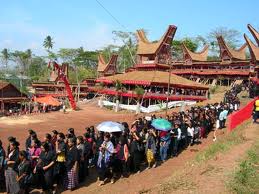