According to historical sources, a Viking funeral consisted of cremation in a ship. Many funerals took place on land with the deceased being cremated on a pyre, (a structure, usually made of wood), in a boat and piles of stone and soil being lain on top of the burnt remains. Pyre's were built on a ship, usually shaped like a dragon's nose.

A funeral for a Viking could, at times, be a considerable, but necessary expense. It was also very common for gifts to be left with the deceased. The amount and the value of the goods were dependent upon the social group to which the deceased belonged and, therefore, it was important for them to be buried in a manner which allowed them to have the same social standing in the afterlife, and to avoid becoming an eternal wandering soul. The manner in which they were buried was also used to provide strength to the grieving family to carry on with their lives.

Note: Pyres are not used in Western culture, rather, crematoriums are used instead. 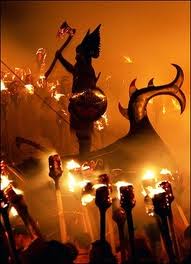 In Viking funerals, there existed an element of fear surrounding death. If a proper burial were not provided for the deceased, the bereaved would be visited by the deceased as a form of revenge. Such a possibility was frightful, as it was interpreted to mean that additional family members would die. It was during the Viking period of starvation, when communities were seemingly struck with series of misfortunes that rumors about the revengeful souls began to flourish. The sagas tell of drastic precautions being undertaken during the Viking funeral ceremony such as a stake being be put through the body of the deceased, or its head cut off, as a way of stopping it from finding its way back to the living.

The following is an account of Viking funeral ceremony of a chieftain or king as described by an Arab named Ibn Fadlan:

"The dead chieftain was put in a temporary grave that was covered for ten days until new clothes were prepared for him. They asked which of his thrall women wanted to join him in the afterlife and one of the girls volunteered. She was guarded day and night, and was given a great amount of intoxicating drinks. She sang all the time with happiness. When the time had arrived for cremation, his longship was pulled ashore and put it on a platform of wood. On the ship, a bed was made for the dead chieftain. Soon after, an old woman named the "angel of death" put cushions on the bed. She was an old witch, stocky and dark. She would be responsible for for the ritual and would be the one to kill the thrall girl.

The chieftain was given new clothes and in his grave, he received intoxicating drinks, fruits and a stringed instrument. He was placed on his bed with all his weapons and grave offerings around him. Then they had two horses run themselves sweaty, cut them to pieces and threw the meat into the ship. Finally, they sacrificed a hen and a cock. Meanwhile, the trall girl went from tent to tent, having sexual intercourse with the men. Each man told her "tell your master that I did this because of my love to him". In the afternoon, they moved the thrall girl to something that looked like a door frame, where she was lifted on the palms of the men three times. Every time, the girl told of what she saw. The first time, she saw her father and mother, the second time, she saw all her relatives, and the third time she saw her master in the afterworld. There, it was green and beautiful and together with him, she saw men and young boys. She saw that her master beckoned for her.

After this, the thrall girl was taken to the ship where she removed her bracelets and gave them to the old woman. She then removed her finger rings and gave them to the old woman's daughters, who had guarded her. Then they took her aboard the ship, but they did not allow her to enter the tent where the dead chieftain lay. The men arrived and brought shields and sticks with them. The men were to beat on their shields so that the girl's screams would not be heard, in order not to discourage other thrall girls from volunteering in the future. The girl received several vessels of intoxicating drinks and she sang and bid her friends farewell. The girl was pulled into the tent and the men started to beat on the shields so her screams could not be heard. Six men entered into the tent to have intercourse with the girl, after which they put her onto her master's bed. Two men grabbed her hands, and two men her wrists. The angel of death put a rope around her neck and while two men pulled the rope, the angel of death then stabbed the girl with a knife between her ribs. When the sacrifice was complete, the relatives of the dead chieftain arrived with a burning torch and set the ship aflame. Afterwards, a round barrow was built on top of the ashes and in the centre of the mound they erected a staff of birch wood, where they carved the names of the dead chieftain and his king. Then they departed in their ships."

During a Viking funeral, the use of intoxicating drinks was said to have put the thrall girl in a trance which made her psychic. Through the symbolic action with the doorframe, she could see into the realm of the dead.

Thralls were often sacrificed during a Viking funeral so that they could serve their master in the next world. In the account above, the thrall girl who was to be sacrificed had to undergo several sexual rites before she was strangled and stabbed. The sexual rites appeared to show that she was considered to be a vessel for the transmission of life force to the deceased chieftain.