A unique jazz funeral tradition in the US occurs in New Orleans, Louisiana. The tradition arises from African spiritual practices, French martial musical traditions and African-American cultural influences. Initially, the term "jazz funeral" was seen as inappropriate by many of New Orleans' musicians and practitioners of the tradition. The preferred term used was "funeral with music" and jazz was just a part of the type of music played, not the primary focus of the funeral ceremony. It wasn't until the nearing of the end of the 20th century that the younger generation of New Orleans brass band musicians, more familiar with the post-Dirty Dozen Brass Band funk influenced style, began to use this term. It became widespread among the New Orleans population - crossing all ethnic boundaries at the start of the 20th century.

In the years preceding World War I, brass band music was viewed as wild and disrespectful, especially among the Caucasian population of New Orleans. Hence, many music funerals became rare among this segment of the population. For much of the mid 20th century, the Catholic Church also frowned on this type of funeral music, and so for many years, the tradition was largely confined to mostly the African American population of New Orleans. During the 1960s, jazz funeral music began to make a gradual comeback. It began being practiced across ethnic and religious boundaries.

A New Orleans jazz funeral begins with a funeral march to the burial site by the family, friends, and a jazz band from the home, funeral home or church. The organizers of the funeral arrange for hiring the band as part of the services. If the deceased is a respected fellow musician or prominent member of the community, additional musicians may also play in the procession as a sign of respect.

Throughout the march to the burial site, the band plays very somber funeral music. Once the service has been conducted at the burial site, the funeral march begins its return. During the return trip, the solemn funeral music played before is now replaced with more upbeat music, often starting with a hymn or spiritual song played in a swinging fashion, then going into popular hot tunes until their is nothing but loud, upbeat, raucous music and dancing to "cut the body loose" and celebrate the life of the deceased.

Onlookers often join in the celebration. Those who follow the band just to enjoy the music are called the second line. Their style of dancing, in which they dance-march and sometimes twirl a umbrella or parasol in the air or wave handkerchiefs above the head that are no longer used to wipe away tears, is called second lining. "New Second Line" is popular tune that is sometimes used in the upbeat portion of the funeral march. This was a song featured in the funeral scene of the James Bond flick "Live and Let Die." Some of the younger funk and hip hop oriented brass bands often dispense with the dirges and hymns all together, or perform only the traditional tune "Just a Closer Walk With Thee." 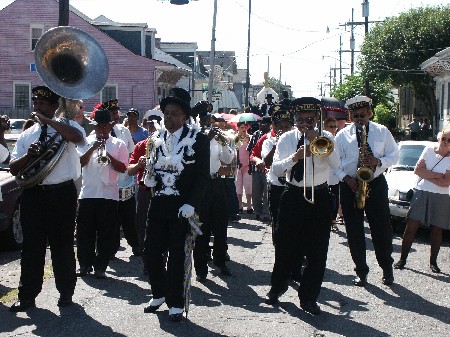