Chinese funerals generally have two main traditions which are observed:

After 100 days, a final prayer ceremony may be held, but this is optional and not considered as important.

To a certain degree, Chinese funerals and burial customs are determined by the age of the deceased, the cause of death, the marital status and the deceased's status and position in society. Burial of the dead is taken very seriously in Chinese culture. Improper arrangements are believed to wreak ill fortune and disaster on the family of the deceased.

In many instances, funeral plans will begin while a person has taken gravely ill. The traditional Asian casket will be ordered. While the style of the casket has traditionally been rectangular with three "humps", recent years has seen western style coffins being used in Chinese funerals.

On the passing away of the father, the eldest son becomes the head of the family. If the eldest son passes away, his second brother does not assume leadership of the family. Leadership passes to the eldest son of the eldest son (the grandson). He must assume the responsibilities and duties to the ancestors on behalf of the family. All statues of deities in the home are covered with red paper and all of mirrors are removed. This is done in order to not be exposed to the body or coffin and to avoid seeing the reflection of the coffin in a mirror. It is believed that a death in one's family would shortly occur if the reflection of the coffin is seen by the individual. A white cloth is hung over the doorway to the house and a gong is placed either to the left of the entrance if the deceased is a male, or to the right if the deceased is female. 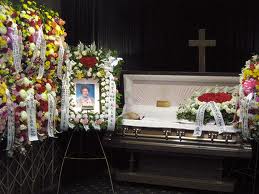 In preparation of the wake or viewing service, the funeral casket is placed either inside the home (if the person died at home) or in the courtyard (if they died away from home). The casket is positioned with the head of the deceased facing the inside of the house and rests about 1 foot from the ground on two stools. Wreaths, gifts and a portrait of the deceased are placed at the head of the casket. Food is placed in front of the casket as an offering to the deceased. The deceased's comb is broken into two and one part will be placed in the coffin and the other part is kept by the family.

During the wake, the family does not wear jewelry or any red items of clothing. Traditionally, children and grandchildren of the deceased did not cut their hair for 49 days after the death, but today, this custom is usually only observed by the older generation. It is customary during a Chinese funeral for the blood relatives and daughters-in-law to wail and cry during mourning as a sign of respect and loyalty to the deceased. The cries are particularly loud if the deceased has left a large fortune. 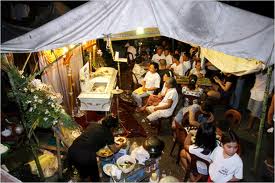 At the viewing, family members gather around the casket positioned according to their family rank. For this service, the family members will wear special colored clothing. Children and daughters-in-law wear black as a sign of their grief being the strongest. Grandchildren will wear blue clothing, and Great grandchildren will wear light blue clothing. Sons-in-law traditionally wear brighter colors such as white as they are considered to be outsiders. The children and daughters-in-law of the deceased will also wear a hood of sackcloth over their heads. The eldest son will sit at the left shoulder of his parent's coffin and the spouse of the deceased will sit on the right. Relatives who arrive later are expected to crawl on their knees towards the coffin.

An altar containing burning incense and a lit white candle are positioned at the foot of the coffin. Joss paper and prayer money, to provide the deceased with sufficient income in the afterlife, are burned continuously throughout the wake service. All funeral guests are required to light incense for the deceased and bow as a sign of respect to the family. There will also be a donation box for offerings given as a sign of respect and to help the family with Chinese funeral costs. Usually, during the wake there is also a group of people gambling in the front courtyard of the home of the deceased. The body of the deceased must be "guarded" and gambling helps them to stay awake during this vigil. This also helps to lessen the grief of the participants.

The length of the wake depends on the financial resources of the family, although it is expected to last at least one day in order to allow for the offering of prayers. It is believed that the souls of the dead face many obstacles, including torment and torture for sins committed in life. Therefore, a monk will chant verses from Buddhist or Taoist scriptures that evening. The prayers, chanting and rituals offered by the monks are believed to help to ease the passage of the deceased's soul into heaven. These prayers are accompanied by music played on the gong, flute and trumpet.

When the prayer ceremonies are over, the coffin is nailed shut to represent the separation of the dead from the living. Then yellow and white "holy" paper is pasted on the coffin to protect the body from malignant spirits. During the sealing process, everyone present must turn away. It is considered very unlucky to watch a coffin being sealed. The coffin is then carried away from the house using a piece of wood tied over the coffin, with the head of the deceased facing forward. Because it is believed that blessings from the deceased are bestowed upon the pallbearer, there are often many volunteers for a chinese funeral service.


After leaving the home in route to the burial site, the casket is first placed on the side of the road outside the house. More prayers will be offered and paper will be scattered. The casket is then placed into a hearse that moves very slowly for one mile, with the eldest son and family members following behind with their heads touching the vehicle. If there are many relatives, a white piece of cloth is used to link the hearse to family members behind. The order of the funeral procession follows the status of the family members. A white piece of cloth is tied to vehicles accompanying the hearse, or a white piece of paper can be pasted on their windshields. The eldest son usually sits next to the coffin. A long, lit joss stick is held throughout the journey, symbolizing the soul of the deceased; it is relit immediately if it goes out. Occasionally, paper models of such objects as cars, statues, ships, etc., are carried during the procession to symbolize the wealth of the deceased's family. If the funeral procession must cross a body of water, the deceased must be informed of this since it is believed that an uninformed soul will not be able to cross water.

Chinese cemeteries are generally located on hillsides which are believed to improve Fengshui (geomantic omen). The higher a grave is located, the better it is considered to be. At the grave site, all present must turn away as the casket is taken from the hearse and lowered into the ground. Once it has been lowered, family members and other relatives will throw a handful of earth into the grave. After the coffin is buried, the keeper of the cemetery will also offer prayers to the deceased. The eldest son will retrieve some earth from the grave to put into an incense holder, and the deceased will be worshipped by the family at home using an ancestral tablet.

According to Chinese funeral custom, after the burial, all of clothes worn by the mourners will be burned to avoid the bad luck associated with death. Family members and relatives are presented with a red packet (a sign of gratitude from the deceased's family) containing money which must be spent.

Although the Chinese funeral ceremony has ended, the period of mourning has not. The family will continue to mourn the deceased for another 100 days. A piece of colored cloth is worn on the sleeve of each family member for 100 days to signify mourning: Black is worn by the deceased's children, blue by the grandchildren and green by the great grandchildren. More traditional families will wear the pieces of cloth for up to three years. This period of mourning is not required if the deceased is a child or a wife. 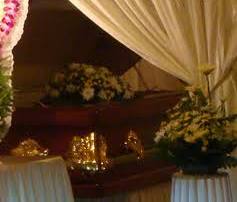 According to Chinese funeral custom, seven days after the death of a family member the soul of the departed will return to his/her home. A red plaque with a suitable inscription may be placed outside the house at this time to ensure that the soul does not get lost. On the 7th day, family members are expected to remain in their rooms. Flour or talcum powder may be dusted on the floor of the entrance hall of the home to detect this visit.

Additionally, according to custom, an elder should never show respect to someone younger. If the deceased is a young, unmarried male, or an infant child, the body cannot be brought home. It must remain at the funeral parlor. The parents are not allowed to offer prayers to their children. In these instances, the deceased is buried in silence.

In many Asian cultures, the wearing of white is symbolic of death. White or off-white robes are traditionally worn to symbolizes someone's death and can be seen worn among relatives of the deceased during a Chinese funeral ceremony. In Chinese tradition, red is strictly forbidden as it is a traditionally symbolic color of happiness. Contemporary Western influence has made dark-colored or black attire acceptable for mourners to wear. As such, mourners wearing dark colors at times may also wear a white or off-white armband or white robe during a Chinese funeral ceremony.