In Hindu funerals, following death, the body is placed on the floor with the head pointing towards the North (considered the direction of the dead). An oil lamp is lit and placed near the body where it burns continuously for the first three days. At this stage, the dead body is considered to be symbol of great impurity, therefore miminal physical contact must be maintained.

After the three day period, the body is bathed in purified water and dressed in new clothes. If the deceased was a male or widow, the clothing will usually be white. If the deceased was a married women whose spouse is still living or a young unmarried girl, the body will be dressed in either red or yellow. Depending upon whether the deceased was a worshipper of Lord Shiva (Saivites) or Lord Vishnu (Vaishnava), either sacred ash (bhasma) or sandalwood paste will be applied on the forehead of the deceased. A few drops of the holy Ganges water may be put into the mouth so that the soul may attain liberation, while a few leaves of the holy basil (tulsi) are placed on the right side of the dead body. The body then may be adorned with jewels, and placed lying on a stretcher, with the head pointing towards the South. At times, the the body may also be kept in a sitting position. The stretcher and body are then adorned with different flowers including roses, jasmine, and marigolds. Thereafter, the close relatives of the deceased person carry the stretcher on their shoulders to the cremation site. If it is located at a distance, the stretcher is placed on a cart pulled by animals or a vehicle.

The cremation site is called Shmashana (in Sanskrit), and traditionally, it is located near a river. At the site, a pyre is prepared and the corpse is laid on it with the feet facing southwards in order for it to walk in the direction of the dead. Any jewelry worn is removed and the the chief mourner, usually the eldest son, walks around the pyre three times keeping the body to his left. While walking, he sprinkles water and sometimes ghee onto the pyre from a vessel. He then sets the pyre alight with a torch of flame. The beginning of the cremation starts the traditional mourning period, lasting until the morning of the 13th day after death. While the body burns, the mourners return home. The process of burning will last for a few hours.

During the period of mourning, the decease's family are bounded by the rules and regulations of ritual impurity one of which is immediately following the cremation ceremony, the entire family is expected to bath. One or two days after the funeral, the chief mourner will return to the cremation site and collect and place the mortal remains in an urn. The remains are then immersed in a river. Many who can afford to perform this rite of immersion choose to have it performed at such places as Varanasi, Haridwar, Allahabad, Srirangam and Kanya Kumari.

The preta-karma is an important aspect of Hindu funeral rites, and its objective is to facilitate the migration of the soul of the dead person from the status of a preta (a ghost or spirit) to the abode of the ancestors (the Pitrs). It is believed that if this stage of funeral rites is not performed or performed incorrectly, the spirit of the dead person shall become a ghost (bhuta). The rites generally last for ten or eleven days, at the end of which the preta is believed to join the abode of the ancestors. Thereafter, they are worshipped during the 'sraddha' ceremonies.

Hindu Funerals: Death in Other Countries

If a person dies in a different country, in a war, or drowns, or in any other manner that his body cannot be retrieved for the antyesti, the funeral rites may be performed without the dead body, and similar procedures are followed had the dead body been available. If such a person appears (that is, he has in fact not died), then "resurrection" rituals are mandatory before his being admitted to the world of the living. 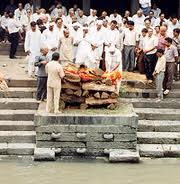