A military funeral is provided by a country's military for a veteran, a soldier who died in battle, or another prominent military figure. When heads of state die, they are often recognized by receiving these types of funerals. Generally, the law allows military benefits to all veterans who were discharged under circumstances "other than dishonorable."

In time of need, family must present the veteran's DD Form 214 to the funeral director as proof of eligibility. The funeral director will in turn, request funeral honors on behalf of the family. The Department of Veterans Affairs (VA) National Cemetery Administration cemetery staff can assist with funeral arrangements at VA national cemeteries. Veterans organizations may also assist you in providing military funerals. Prior arrangements must be made by the funeral home for requests to have services held at a national cemetary.

Those who are eligible for U.S. military funeral honors include the following:

In the US, the Department of Defense (DOD) is responsible for providing military funeral honors to those who served. As of January 1, 2000, Section 578 of Public Law 106-65 of the National Defense Authorization Act mandates that the U.S. military provide US military funeral honors for an eligible veteran if requested by the family. According to the law, an honor guard detail for the burial of the eligible veteran shall consist of no less than two members of the armed forces. One member of the detail shall be a representative of the parent armed service of the deceased veteran. The honor detail will, at a minimum, perform a ceremony that includes the folding and presenting of the American flag to the next of kin and the playing of "Taps" by a bugler, if available, or by electronic recording. Today, there are so few buglers available that the U.S. military services often cannot provide one. The law allows Reserve and National Guard units to assist with the funeral honors duty.

US military funerals include all or some of the following, depending on status of deceased (active, retired, veteran, rank/occupation):

Note1: This practice originated in the old custom of halting the fighting to remove the dead from the battlefield. Once each army had cleared its dead, it would fire three volleys to indicate that the dead had been cared for and that they were ready to go back to the fight.

Note2: The practice of firing a canon originated in the British Royal Navy. When fired, the cannon partially disarmed the ship, therefore firing the cannon represents trust and respect.

Note: If the individual dies while in active duty, the flag is provided by the branch of service under which the individual served. The US Veterans Benefits Administration (VBA) provides the US flag, for no cost, to a veteran. The flag can be used to drape the casket or accompany the urn.

Salute by gunfire is a very old tradition. In the earliest days, seven guns was a recognized British National Salute. Early regulations stated that, although a ship could fire only seven guns, the forts could fire for honors three shots to the ship's one shot. Once the quality of gun powder improved due to the use of potassium nitrate, the sea salute became equal to the shore salute -- 21 guns as the highest national honor. Because of confusion amongst the various customs of maritime states, the British government would propose to the US, a regulation that provided for "Salute to be Returned Gun for Gun", or the 21 gun salute. The US would adopted this regulation, having previously used the one gun for each state practice.

"Taps" was composed by the Union Army's Brigadier General Daniel Butterfield while in camp at Harrison's Landing, Virginia, in 1862. Butterfield wrote the call to replace the earlier "Tattoo" (lights out), which he thought too formal. The call soon became known as "Taps" because it was often tapped out on a drum in the absence of a bugler. Before the end of that year, sounding Taps became the practice in both the Northern and Southern camps. The call was officially adopted by the U.S. Army in 1874. Colonel James A. Moss, in his Officer's Manual first published in 1911, gives this account of the initial use of Taps at a military funeral:

"During the Peninsular Campaign in 1862, a soldier of Tidball's Battery A of the 2nd Artillery was buried at a time when the battery occupied an advanced position concealed in the woods. It was unsafe to fire the customary three volleys over the grave, on account of the proximity of the enemy, and it occurred to Capt. Tidball that the sounding of Taps would be the most appropriate ceremony that could be substituted. The custom, thus originated, was taken up throughout the Army of the Potomac and finally confirmed by orders."

Questions or comments concerning the DOD Military Funeral Honors Program may be sent to the address listed below. You may also visit their website. For assistance with arranging a military funeral, contact your local funeral home.

Department of Defense
Directorate for Public Inquiry and Analysis
Room 3A750, The Pentagon
Washington, DC 20301-1400 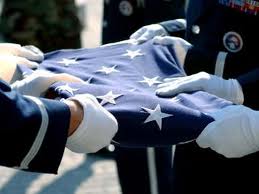