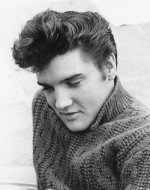 Elvis Presley Funeral
Elvis Presley's talent, good looks, sensuality, charisma, and good humor endeared him to millions of people, as did the humility and human kindness he demonstrated throughout his life. Known the world over as simply Elvis, he is regarded as one of the most important figures of 20th century. Elvis Presley died at his Memphis home, "Graceland", on August 16, 1977. The Elvis Presley death touched the hearts of millions of adoring fans the world over.


On Tuesday, 16 August 1977, just after 2 p.m., Elvis was found on the floor of his bathroom at Graceland with his face down and unconscious. At 3.30 p.m. Baptist Memorial Hospital would pronounce him dead. A half hour later at Graceland, his father, Vernon Presley, grief stricken, would announce, "My son, Elvis is dead.." It was a day that everyone remembers: Where they were, what they were doing when they first heard the news - "Elvis is Dead". Two days later, the Elvis Presley funeral became a "media circus", with thousands of fans descending upon Graceland.

Funeral director, Robert Kendall of the Memphis Funeral home would arrange all the procedures for Elvis Presley's burial, including the use of a similar casket that his mother Gladys had been buried in 19 years earlier. 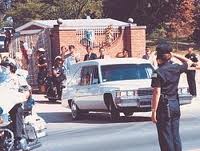 Elvis Presley Funeral
Following the private funeral service, the caravan, led by a silver Cadillac followed by the white Cadillac hearse with Elvis' body and seventeen white Cadillac limousines, drove the two and a half miles, passing bystanders, to a mausoleum in Forest Hill Cemetery Midtowns.


Inside the white marble mausoleum, a small ceremony was held. At approximately 4:24 p.m., Elvis Presley's body was entombed in the sixcrypt family chamber. Vernon Presley would be the last the emerge from the mausoleum, visibly shaken. Family and friends then returned to Graceland for a Southern supper.

For the Elvis Presley funeral, there were more flowers than one could count: dozens of floral guitars and hound dogs and hearts - at least 3,166 floral arrangements sent from people all over the world including the Soviet Union. His father would decide to give all the flowers to fans, and at 8:25 a.m. the next morning, the process would begin. By 11:30 a.m. every single flower would be gone. 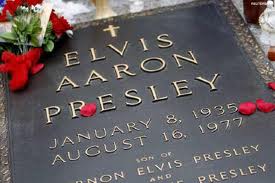