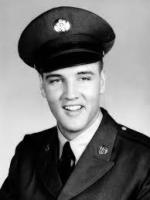 Elvis Presley Photos
During 1958, while Elvis is in Germany, a Captain Joseph Beaulieu moves his family from Texas to Weisbaden Air Force Base near Friedberg, Germany. He is accompanied by his wife and children, including his 14 year-old stepdaughter, Priscilla Ann. Priscilla is the only child from Ann Beaulieu's first marriage to James Wagner, a Navy pilot killed in a plane crash when Priscilla was an infant. In September, through a mutual friend, Priscilla is invited to a party at Elvis' home where they meet and the rest, as they say, is history.

The Prince and the Princess 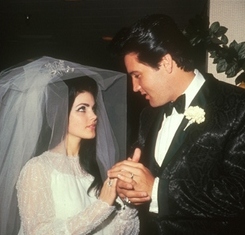 Elvis Presley Photos
On December 20, 1966 in addition to presenting Priscilla with a horse for Christmas, Elvis formally proposes marriage. On May 1, 1967, a little after 11:40 a.m., they are married in a private ceremony at the Aladdin Hotel in Las Vegas, attended by a small group of family and friends. A press conference, breakfast reception and honeymoon followed. They would stay a few days in Palm Springs, then return to Memphis where they would have a second wedding reception in the trophy room at Graceland to accommodate family and friends who did not attend the Las Vegas wedding.

Elvis Presley Photos
In August of that same year, news of Priscilla's pregnancy is announced and by November 1967, the couple would purchase their first home in Beverly Hills at 1174 Hillcrest for $400,000. They would subsequently purchase a second home in California at 144 Monovale for $339,000 on December 4th, 1970. But for all their blessings, their greatest would be in the form of little Lisa Marie Presley, born to Elvis and Priscilla on February 1, 1968. She would be the spitting image of her daddy's eyes.

Elvis Presley Photos
During January and February 1968, Elvis would return to the stage, breaking his own attendance records. One-piece jumpsuits debut and karate moves became an even bigger part of his stage show. The live album, "On Stage," is recorded in February and reaches #13 on the album charts. Elvis would perform six shows at the Houston Astrodome, to an audience of 207,494 people, setting records. During one of the press conferences, he would be presented with an armload of gold record awards. Elvis would go on to record several singles and material for his albums throughout the years, while performing on stage and creating additional Elvis Presley movies and film documentaries, most notably, "Elvis-That's The Way It is," an MGM project that opened to good reviews in theaters.

Elvis - The Early Years
"My Son, Elvis is Dead"